Rainbow Fund launch Community Consultation Survey to listen to feedback about services on offer to the LGBT/HIV communities they fund in the city.

The Rainbow Fund receives donations from the Brighton LGBT communities, raised through events such as Brighton Pride and Brighton Bear Weekend, fundraising by venues, and donations from individuals throughout the year.

Those funds then go back into the Brighton and Hove LGBT and HIV communities, via grants to groups and organisations supporting those communities. 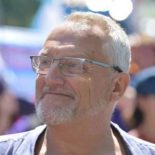 Chris Gull, Chair of The Rainbow Fund, said: “We are asking as many people as possible to let us know what they think are the priorities for supporting our communities, how the existing groups and organisations are doing, and whether there are sections of these communities that are not being reached, or not well served. We also want to hear suggestions for where we should be spending the funds, and what needs to be achieved, perhaps changes that need to be made.

“We are consulting with the communities, and those that already engage with us, directly through an online document – mostly asking for anonymous comments and suggestions.

“The comments will be fed directly into the decision-making process for the next round of grant applications, and will inform the decisions we make in moving the Rainbow Fund forward.”