Brighton Rainbow Fund: How it Works 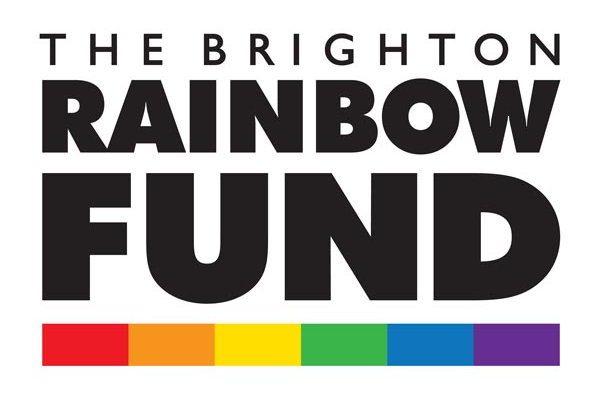 James Ledward and Paul Elgood started the Brighton Rainbow Fund 10 years ago as a legacy project with money left from the public appeal used to commission TAY, the Brighton AIDS Memorial in New Steine Gardens.

The concept is simple: funds raised within local LGBTQ+ communities to support our local LGBTQ+ and HIV projects are donated to a central hub. Fundraisers, venues and individual donors no longer have to decide which project to support; they can donate to the Brighton Rainbow Fund knowing that they are supporting all the projects that benefit hundreds of people within our communities. As for those projects, the concept means that there is a level playing field for projects big and small. This is especially important for new projects with no track record, and without the ‘clout’ to lobby fundraisers, venues and donors that the larger organisations have.

This annual event celebrates the work that the projects do. This year there were a record 23 grants made in the main funding round that benefit so many in the LGBTQ+ communities and allow us to applaud the success of our community fundraisers, venues and donors who make that work possible.

After several years of generous hospitality from the Brighton Hilton Metropole hosting the event, it moved to take up the offer from the Old Ship Hotel of the Paganini Ballroom this year, and was brilliantly hosted by Lola Lasagne, aka Stephen Richards, who was fresh from their powerful, moving speech on the main stage at Pride. Zoe Lyons, the Patron of charity, sent her love via video.

Deputy Mayor Cllr Alan Robins, Chief Superintendent Nick May, Cllr Nancy Platts, Leader of the Council and Labour Group, Cllr Phelim McCafferty, Convener of the Green Group, together with some distinguished former mayors and some of our performers who have been staunch supporters since the charity began, were welcome guests, and the room was filled by both those who’ve raised the money, and those involved in the projects receiving grants.

There are a disproportionate number of LGBTQ+ people living in Brighton & Hove compared to nationally. The council’s own figures estimate more than 15% of the adult population identify as LGBTQ+, that’s more than 35,000 people. Nationally that percentage is estimated to be between 2% and 6%.

The National LGBT Survey last year found that LGBTQ+ respondents are less satisfied with their lives than the general UK population, with trans respondents recording even less satisfaction.

• More than two thirds of LGBT+ respondents said they avoid holding hands with a same-sex partner for fear of a negative reaction from others.

• At least two in five respondents had experienced an incident because they were LGBTQ+, such as verbal harassment or physical violence in the 12 months preceding the survey. However, more than nine in 10 of the most serious incidents went unreported, often because respondents thought ‘it happens all the time’.

• 24% of respondents had accessed mental health services in the 12 months preceding the survey.

People identifying as LGBTQ+ experience disproportionate levels of hate crime, both physical and verbal, mental health issues, domestic abuse, loneliness and social isolation. We are not alone in experiencing these issues, but we need LGBT+ specific services to support those in our communities experiencing them, and that’s where these projects come in.

The Brighton Rainbow Fund Grants Presentation was an acronym filled evening, and the plethora of acronyms is recognition of where we are within our communities. They reflect the idea that our so-called LGBT+ community actually consists of a diverse collection of communities and cohorts within those communities. Those simple four letters don’t do it anymore, they can’t encompass the intersectionality, the multiple marginalisation, the distinct yet overlapping identities that exist within sexuality and gender identification and expression.

Bottom line is we know who we are, hope to be united and respectful to each other in adversity and recognise that neither privilege, nor adversity, are distributed equally amongst our communities. We hope that those of us with privilege recognise it, and use it for the benefit of us all.

So, to our fantastic community fundraisers we say thank you, we hope that you’ll be impressed with how the funds that you work so hard to raise through the year are used to deliver such brilliant benefits to so many in our communities.

For the first time each project was invited to say a few words about how the grant will be affecting the lives of those involved. These short speeches really illustrated the strength and sense of community, and just how much volunteers donating their time and talent contribute.

In total 23 grants, totalling £183,000, were presented. The total over the year is likely to be even more, as some of these grants are for pilot projects, or seed funding, and will go on to be reviewed and supported as fully functioning projects.

This was the first event that Gscene’s editor – James missed. He was usually there, at the front, taking the photographs and holding court, and was so disappointed that he wasn’t well enough to be with us, but so proud of how far the charity that he founded 10 years ago has come, due to the hard work of the fundraisers and generosity of donors, as well as the strength and cohesion of the LGBTQ+ communities delivering these vitally needed LGBTQ+ and HIV services, and particularly their volunteers.