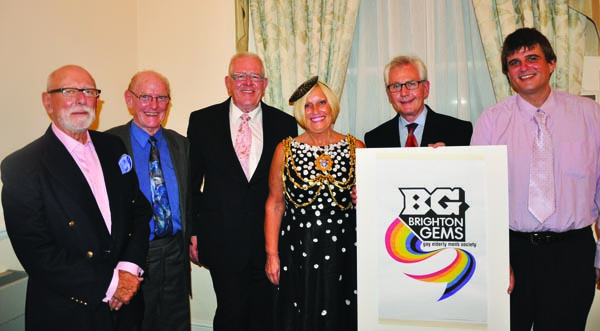 Outcomes from last year’s funding by the Rainbow Fund have highlighted the value of grants to local LGBT and HIV community groups.

Working with Brighton Pride, the Brighton Bear Weekender and other fundraising groups and venues to maximise the money available to give out, community organisations such as GEMS, who work with gay older men in the city, have been able to increase their frontline work with men suffering from isolation and loneliness.

Robert Douglas from GEMS said; ‘Firstly we wish to thank the Rainbow Fund for supporting us when we are in need of financial assistance as a group whose sole aim is to take older gay men in Brighton and Hove out of isolation. The gay community is getting older and increasing in numbers here in Brighton and Hove which makes our support group even more important. We cannot do this without financial help from charities like the Rainbow Fund even despite all our admin team being unpaid volunteers.

‘The grant received from the Rainbow Fund in 2013 has enabled us to extend our services and reach out by way of a new website and printed literature. In the past we have had to accept that we could not afford printed literature and used photocopy leaflets and cards.

‘Now we can have details of the services we offer put into public areas, doctors receptions and with other Brighton and Hove groups. Reaching gay men in isolation has always been very difficult through lack of funding.

‘With the financial help received from you we have been able to extend the services in the group to include more visits outside Brighton and Hove by coach. We can now give assistance to those guys whose only income are low pensions, the chance to go to swimming baths once a week for much needed exercise. We can now afford to get speakers to our group who can inform them with help https://everyhealthclub.com/generic-prednisone/ about medical problems, social services available in Brighton and Hove and many other subjects to improve the health and security of our members.

‘Without your funding we would have had to cut back all our services which in this difficult time of cuts in social services would mean a greater number of Brighton’s gay men being thrown into depression and more isolation.

Robert concluded: ‘Thank you to the Rainbow Fund and Pride for your much needed financial assistance and hope you will be there for us again in the future as the number of guys needing support steadily increase.’

Paul Elgood, Chairman of the Rainbow Fund said: ‘This is exactly how the Rainbow Fund can best support LGBT and HIV groups in our community. This volunteer-led group for older gay men is making a huge impact amongst its beneficiaries. Loneliness and isolation can often be as much a killer as ill health, with a dramatic impact on life expectancy. Thanks to our funders, such as Brighton Pride, there is a very clear benefit to the community through funding such as this.’