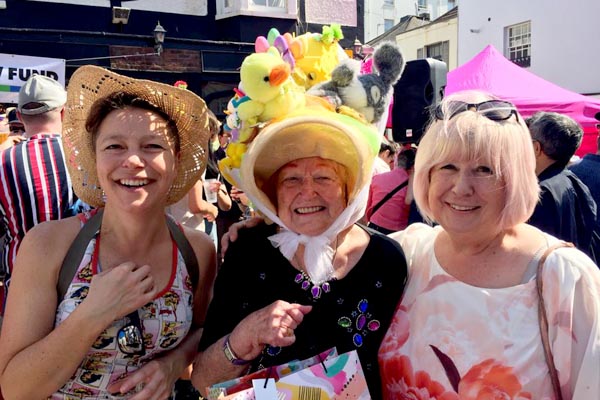 Organised between the Bedford Tavern and Grosvenor Bar, glorious weather and searing temperatures brought record crowds to Western Street on the borders of Brighton and Hove for what many have described as the “Best Community Easter Event” yet.

Adam Brooks, owner of the Bedford Tavern and event organiser said: “Firstly I want to thank the hard-working teams of bar staff at both The Bedford and Grosvenor, who worked their socks off all day keeping everyone refreshed while staying calm and good-natured throughout a very long shift. Team Bedford was enhanced with the amazing Brighton Tavern crew this year and everyone did an exceptional job – thank you!

Thanks to Chris Hibbert and the boys who helped out during the afternoon manning the street closure, doing crowd control and stewarding, while running around and helping clean the street, you guys were an amazing help – thank you!”

“Thanks to Sue Colman (an amazing help before, during and after the event), Sally and Adam (Mary) manned a very busy betting station, selling raffle tickets and piano bingo tickets throughout the day – a major part of the fundraising was down to the efforts of these guys and I am so grateful for all the help they provided.

“To the countless local businesses and individuals that donated prizes that were used as part of The Easter Bonnet Parade, Drag races and raffles – thank you sooooooo much.

“To all the drag runners, without you we don’t have the drag races, and this is what pulls in the crowds. Thank you all for getting involved and surviving a rather sweaty Easter. For the first year ever nobody took a tumble although plenty of you cheated! To those who made bonnets and paraded down Western Street, you all made an extraordinary effort and I thank you for helping keep this special community tradition alive.

“Into the evening JB kept the crowd lively with his sing-a-long and a bonkers piano bingo – as much as I tease him he does a fantastic job – cheers JB!

“The gorgeous Billie Gold, Laura Nixon and our very own Jason Thorpe provided the outstanding evening cabaret and all gave up their time for free. There really was something for everyone during the show and brought our epic day to a wonderful end – thank you so much you are a fabulous bunch.

“To the artist David Barker, thank you for the amazing painting that you donated for auction, it was stunning and went to a very happy bidder, raising £450 for The Rainbow Fund.

“Finally, thank you to everyone who turned up, bought raffle tickets, placed ‘bets’, put money in buckets and helped us raise money for The Rainbow Fund, without you it simply wouldn’t happen.”

The Rainbow Fund is a Brighton based charity that give grants to local LGBT+/HIV organisations who deliver effective front line services to LGBT+ people in the city.