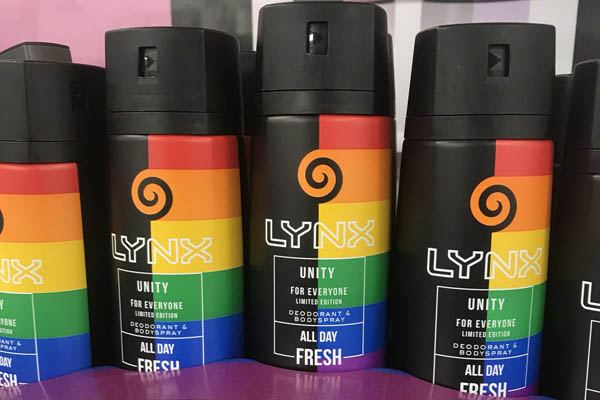 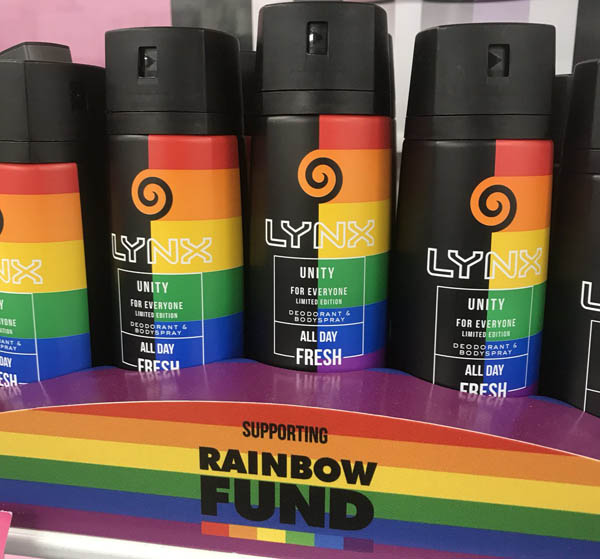 THE RAINBOW version is available exclusively in Superdrug throughout the summer, following the launch of Lynx Unity earlier this year.

Lynx, the UK’s leading male grooming brand, has teamed up with Pride this summer to create a limited edition version of its newly-launched Unity body spray.

The rainbow emblazoned can – a design synonymous with Pride – will be available exclusively in Superdrug this summer. During this time, Lynx and Pride will collaborate for the first time ever to offer a fun-filled weekend through a series of celebrations at Brighton & Hove Pride from Friday, August 3.

Lynx will be bringing its very own beauty bar to the entrance of Brighton Pride’s main dance stage, to give festival-goers the chance to freshen-up throughout the weekend. The grooming brand will also be entering its own float into the Brighton Pride community parade, which will support the work of Brighton & Hove’s Rainbow Fund, a grant-giving organisation for local LGBT and HIV community groups who deliver effective front line services to LGBT+ people in the city.

Lynx has played an influential part in the daily lives of British men since 1985, and the launch of Unity represents a further step in inspiring guys to express their individuality: ditching stereotypes, gender division and labels by offering a ‘for everyone’ version. No matter what sex, gender, race or sexual orientation – Lynx Unity is indeed for everyone.

A new version for 2018 – Lynx Unity combines floral scents with the subtle notes of honeydew melon and sandalwood. Delivering a fresh and impactful fragrance, the new scent will leave you smelling fresh all day – designed to give everyone the confidence to be their best and most confident selves.

The collaboration with Pride is an extension of long-lasting and continued social mission partnerships.

In 2017, Lynx partnered with Ditch the Label for its Is It ok For Guys? campaign – a mission to get young guys to ditch the labels holding them back, with a reminder that the most attractive man you can be, is yourself.

Jamie Brooks, Lynx’s Brand Manager says: “We are extremely proud to be continuing our work in supporting young people to express their individuality by partnering with Pride for 2018, which is set to be one of the biggest events of the year. Lynx Unity, launched earlier this year, has been created for everyone. Partnering with Pride represents a very special and iconic moment for the Lynx brand, and we can’t wait to celebrate in Brighton”.

Lynx Unity is available in a 150ml can and is priced at £3.15 (RRP). (Prices are at the sole discretion of the retailer).