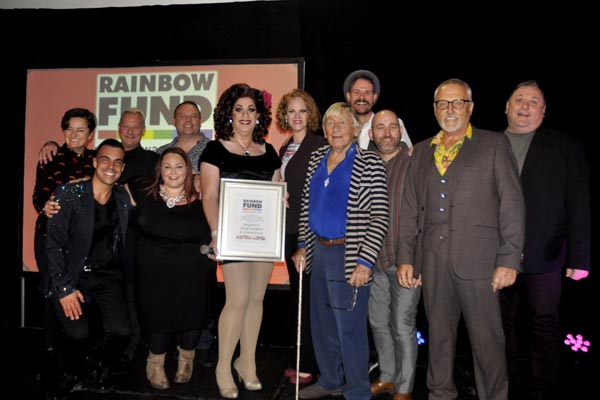 Brighton entertainers honoured at last nights (October 15) Rainbow Fund Awards for their support of the city’s LGBT+ organisations over the last thirty years.

THE Rainbow Fund distributed £146,481 in grants to LGBT+/HIV organisations at the Hilton Brighton Metropole last night (October 15) following their post Pride grants round  which was conducted by an independent grants panel.

The awards were hosted by Rainbow Fund Patron the comedienne Zoe Lyons and Lola Lasagne while Miguel Santiago thrilled the audience on his electric violin.

Grants totalling over £180,000 were awarded to local LGBT+/HIV organisations who deliver effective front line services to LGBT+ people in the city.

This years awards included a trail blazing investment of £25,324 in dedicated services provided to trans and non binary people in Brighton and Hove by The Clare Project, Allsorts Youth Project and My Genderation.

Chris Gull chair of the Rainbow Fund told the audience: “I came to Brighton in 1976…convinced that I lived in a Utopia because it was at last legal for me to have sex with another man (as long as it was in private, and no more than two of us in the room). My cosy view of the world was shattered within a few years by the arrival of AIDS, and Section 28.

“As a community we worked to fight both the epidemic, and the Government. Grass roots organisations sprung up, resulting in the early incarnations of Pride, the commissioning of The Sussex Beacon and much more.

“I personally became involved with an organisation called Brighton Cares, and ended up Chairing the charity for seven years. Brighton Cares was a hardship fund for individuals affected by HIV and AIDS. We raised funds by putting on entertainment events, including one huge show each year at The Dome. Absolutely central to our fundraising then, and still nearly thirty years later, are our Drag Queens and entertainers.

“Between them they have given their time and talent absolutely free to fundraise not only for Brighton Cares, but charities in Thailand and Gran Canaria – not only for The Rainbow Fund, but for individual organisation such as Mindout, The Community Safety Forum, the Sussex Beacon and every year they donate their services free of charge to appear in the cabaret tent during Brighton Pride.”

Stephen Richards aka Lola Lasagne added: “Nights like this remind everyone of how diverse our LGBT+ scene is. We become very aware of how many different issues we face, as a community, and how many people we can help by Brighton’s continual fundraising. And, given that all these groups rely on our donations and efforts it’s more important than ever to carry on.”

Rainbow Families
Grant up to £1,500 for core costs, mostly venue hire for events.

My Genderation
Grant up to £2,500 for seed funding film project to celebrate trans lives and experiences, plus support to source further funding to complete project.

MenTalkHealth
Grant up to £1,700 for core costs and up to £3,000 for production of 12 podcasts addressing mental health issues within the LGBTQ+ communities. Total £4,700

Older and Out
Grant up to £6,000 for continued support for monthly lunch, networking and information club for LGBT+ Elders.

Longhill School LGBTU group, supported by Latest CIC
Grant up to £6,870 for involvement of 20 to 30 LGBTU+ students and their allies to produce a TV series for broadcast, to be used in Schools. Latest CIC will provide Directors’ time for free, discounted studio time and technical support.

Marlborough CIC QTIPOC project
Grant up to £7639, for start up funds for a new QTIPOC monthly meet up with creative workshops.

The Sussex Beacon
Grant up to £7,640 for group work programme.

Switchboard
Grant for up to £11,500 for continued support for The Rainbow Café LGBTQ Dementia project: Up to £7,000 for seed funding and support for new ‘Grief Encounters’ LGBTQ+ Bereavement project. Total £18.500

Allsorts Youth Project
£6,124 grant for continued support for Transformers and other trans specific youth group work and up to £13,778  for LGBTQ+ youth group work, particularly around mental health and well being. Total £19.902