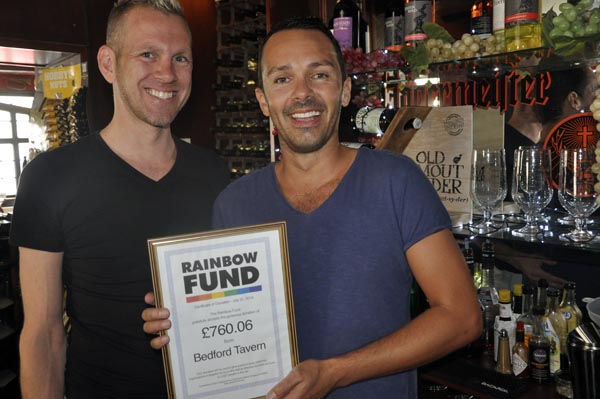 The Bedford Tavern raised the money during their Christmas in June weekend at the end of June.

The money will be distributed to LGBT/HIV organisations in the Rainbow Funds Autumn grants round.

Chris Gull, Chair of the Rainbow Fund, said: “This is a fantastic amount of money for a small venue like the Bedford Tavern to raise for us. I would like to thank Adam and his staff for choosing the Rainbow Fund.

“Local LGBT/HIV organisations who provide effective front line services to the LGBT communities in Brighton and Hove will receive their grants at the Rainbow Fund and Pride Business Grant Awards at the Hilton Brighton Metropole Hotel, on Tuesday, September 8 at a ceremony hosted by our Patron Zoe Lyons.”